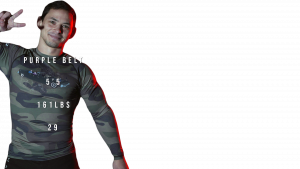 Your Decatur qualifier runner-up and first at-large bid. Quadzilla features a killer leg attack with ridiculous grips. At 5’5″ and 160 lbs, he’s one of the smaller competitors (other than those tree trunks). His preview video suggested he’s going to continue going back to the well with his leg attacks which would limit his points in the season unless he can emulate the Elbow Genie in securing those subs in the first minute. Of course, Evers could be using some misdirection on us. He’s wicked smart – let’s just say he’s the type of guy who could rock one of those “rocket scientist” bumper stickers you may have seen if you live near the aviation/space industries. Another competitor with limited footage, it will be interesting to see his full game this season.