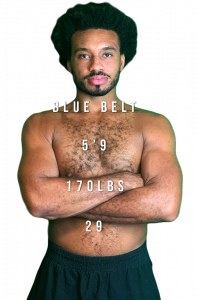 Honestly I would be surprised if Roden drops this far. This ranking is only based on Roden’s still limited time in jiu jitsu – going on about two years. Still, Roden is a multi-time Georgia state champion, being undefeated his junior and senior years. He parlayed those results into a scholarship to Duke University where he competed for five years (you can still find videos of him teaching technique like his deadly heel pick on their Facebook page). He’s probably the best athlete in this competition. On the feet, he’ll hit heel picks, throw bys, and don’t let him get double overhooks or you’re going for a ride. On the ground, he’s super smooth, flowing between positions, but he showed us in PGF Season 2 he needed to work on his submissions. In Season 2, he played the blue belt – the belt of surviving. Don’t get me wrong, he was trouble for any competitor, but he hadn’t solidified his killing strokes. Now, the word is he’s added some submissions, including leg locks and the “anal strangle” (his words, not mine check out the Atlanta qualifier to see it). In Season 2, the competitors were joking that they better not teach Roden anything – this time, with more time to work on his offense and great coaches, Roden could easily be the blue belt to submit a black belt or two.